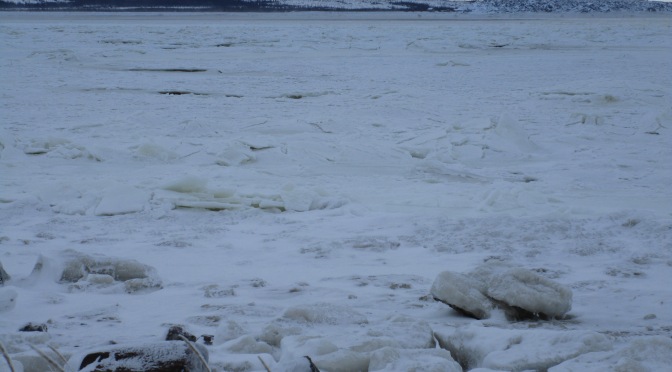 Churchill was located on a narrow peninsula; one side faced Hudson Bay; the opposite side lay the Churchill River.

I had already visited the bay side of town so walked towards the river. Despite wearing a balaclava and a touque, the wind cut into my cheek bones so I headed for the railway station to thaw out.

There were relics from the old Hudson Bay Company era when fur trapping was a thriving business before the Arctic animals were close to extinction. A stuffed polar bear was thrust in the corner of another display but no one was about except for a passenger waiting for the six o’clock train.

We walked behind the train station down to the river that appeared as wide as a bay. In one direction was the mouth of the river extending into Hudson Bay; to the other, the river headed south, narrowing a kilometre or so beyond. It was still except for the cutting wind. The river was a frozen lump and as we turned back towards the railway station, I wondered how people managed to live in this fierce climate.