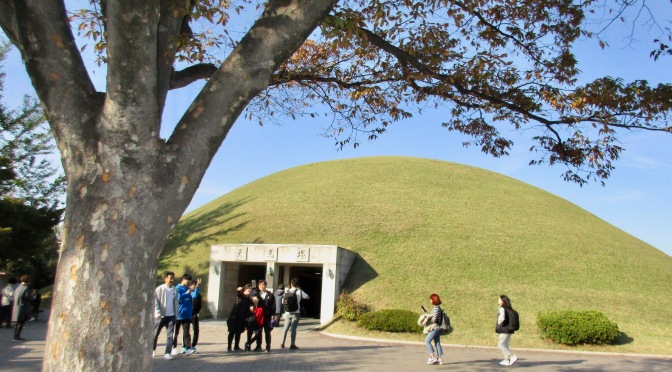 With the establishment of the Kim family as hereditary monarchs, slowly the Silla Dynasty expanded and flourished for under three hundred years. I headed north from Busan to Gyeongju to find out more about the Silla kings.

Gyeongju was full of royal burial mounds. They were constructed by placing the coffin and a chest for objects on a flat surface, then building a wooden chamber on top. Boulders were piled over the chamber before the tomb was covered with earth.

Within walking distance from my hotel was Cheonmachong, meaning heavenly horse tomb that was excavated in 1973. Over 11 000 artifacts were recovered from the site and some were on display inside the mound. One that caught my eye was a gold cap that was mounted on a hat made from birch. But there were other stunning pieces — gold shoes and a gold crown that had been worn at burial — items that were meant to flaunt the ruling class’ influence.