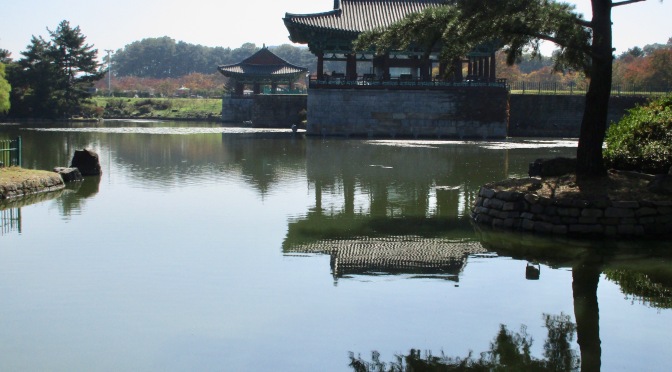 Across the road from Gyeongju’s Wolseong Palace excavation site was Donggung Palace. Twenty-six architectural remains were identified where the royal families of the Silla Dynasty once lived.

Only three buildings had been restored as well as Wolji Pond, but this was still an interesting place to explore because some of the excavated artifacts were on display in one of the buildings.

A roof tile with scary faces to repel evil spirits was showcased. But there had been fourteen different kinds of roof tiles unearthed that gave an indication of how beautiful the buildings must have been.

Fascinating were the wooden strips that were documents or letters and were used before paper was invented or when paper was rare. Over 100 of these strips had been excavated that dated from the 8thcentury and many had holes so a string would pass through them. Many Buddha statues dating from the 7thor 10thcenturies were uncovered as well as metallic and earthenware dishes, bowls and spoons.

These artifacts were the highlight for me even though Wolji Pond made this a perfect setting. As a bonus, I visited on a Monday and the weekend crowds had diminished.