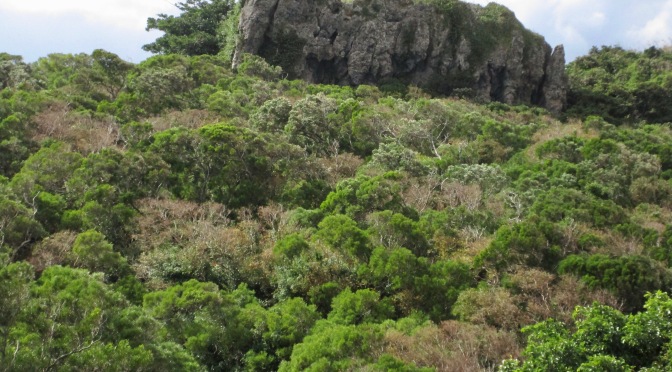 This was where I couldn’t understand how prices for different sites in Taiwan were decided. Maohitou definitely wasn’t worth the T$30 while at this nature park, there was so much to see and it was free.

The location had once been a Paiwan aboriginal village surrounded by coral reef topography and limestone caverns. When Sika deer numbers dwindled to twenty, a portion of the park was set aside so they could reproduce. While their numbers had increased, I never saw any though I did spot a Formosan monkey on the way up. Additionally, with some plants still flowering in the mild winter, the park was full of butterflies on every trail. Not surprisingly, there were over one hundred species.

Both the Minor and Major Gorges were astounding to walk through. There was no sound in the depth of the gorges. Roots intertwined with the rock face that often stretched upwards seventy or eighty metres. I climbed to the skyward pavilion before leaving the park. It offered a commanding view of the coastline as well as a bird’s eye view of the thick vegetation that covered most of the park.