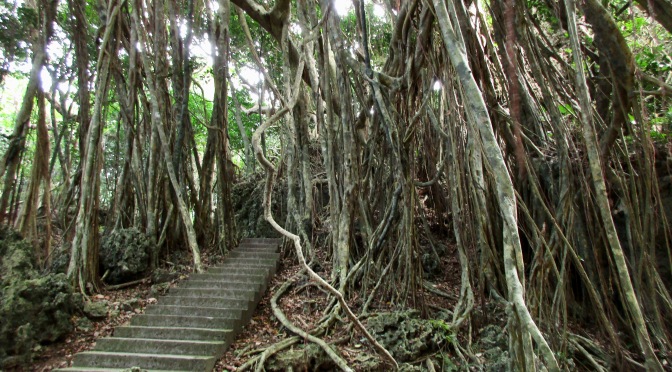 Kenting National Forest was originally known as Kuraluts when it was a Paiwan Village until Chinese farmers arrived in the late 1800s. In the early 20thcentury under Japanese colonial rule, a tropical plant nursery was established, but when WW11 ended, the nursery was converted into a botanical garden. Research continued, but the location now promoted tourism and ecotourism as well.

The end of November was the off season in Taiwan — “winter.” For me it meant less tourists and cooler weather rather than the stinking hot peak season. But it also meant it was a time of repairs which I was reminded of when I followed the Fairy Cave Trail and learned on arrival that this cave, the Seaview Tower and the Silver Dragon Cave were all closed. The second exit was also blocked that had some hikers confused about how to exit the park.

In spite of these hassles, the coral reef limestone landscape and the vegetation outweighed missing the caves. I passed an autumn maple with an empty trunk that still managed to spread its crown 15 square metres. There were fig trees that attached themselves to other trees to reach higher for sunlight, and banyan trees with their above ground roots that sank into crevices of rocks for nutrients and moisture. There was even a small stalagmite cave near the park entrance.

A warning about snakes and wasps made me vigilant, but the only wildlife I saw (except for butterflies) was after I left the park and spotted a red-bellied tree squirrel that I would have missed if it hadn’t been so noisy.