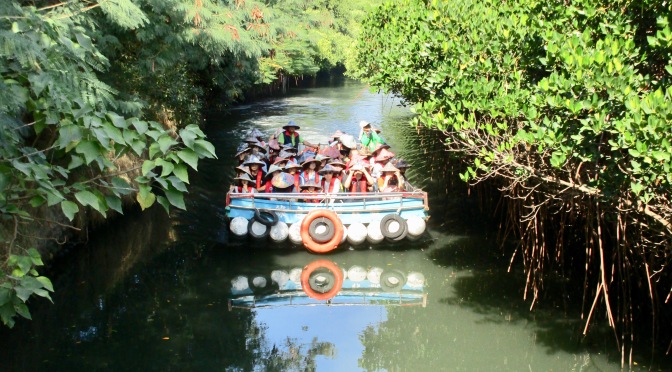 If you’ve never been surrounded by mangroves, Green Tunnel is the place to visit. I crossed the car park where litter lined the walkway. In fact, I’d walked all the way from Anshun Salt Flats, and loads of garbage had fluttered by the side of the road — and this was a national park.

On a bridge I spotted tour boats, but when I saw the long line up, decided to forego the tour where I wouldn’t understand a word of what was said. I’d lived on an island once almost completely fringed with mangroves, so idled through a small park where I discovered there were different varieties of mangroves.

First there was the white flowered black mangrove that was becoming rare because of the destruction of its habitat. Other varieties included the gray and Druce mangrove. Sadly the red mangrove was on the endangered list.