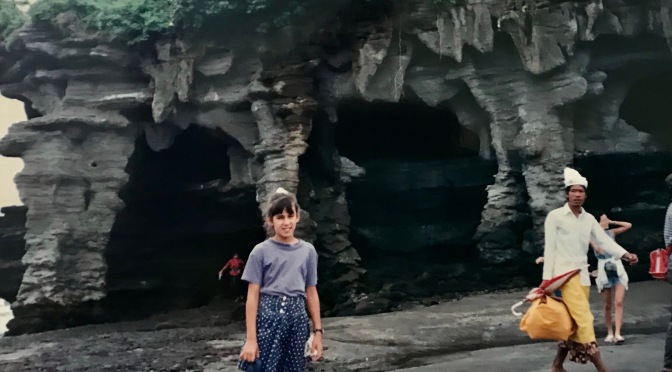 I was glad we stayed in Sanur Beach because it hadn’t reached the tourist fever pitch of Kuta. Our accommodation was right on the beach where we sat sipping coconut water and enjoying the last of our holiday.

During those six days, we visited Taman Ayun in Mengwi, a Hindu temple constructed in the sixteenth century that reminded me of some of the buildings in Nepal I’d seen photos of. This was an interesting site but being unprepared against the rain that poured down on us, I didn’t explore the grounds as much as I would have otherwise.

We toured Pura Goa Lawah in Klungkung on the central east coast. The complex was founded by a Hindu priest in the eleventh century and considered one of Bali’s holiest sites. I don’t remember anything about the temples, but the sight of thousands of nectar bats hanging from the cave’s ceiling was unforgettable. I was mesmerized by a lizard unsuccessfully trying to catch a batty meal, but there was only so far it could stretch along the cave’s ceiling without falling off and the bats were just out of reach.

We entered Goa Gajah also known as the Elephant Cave because of its proximity to the Elephant River. The cave was believed to date from the eleventh century and was thought to have been used by Hindu priests. The entrance was decorative, but inside was small with a niche for Hindu gods.

By the Floating Temple (featured photo) on Bali’s west coast, we met a couple from Sumatra who put the germ of an idea in my head about visiting Indonesia’s biggest island before our trip was over. At Denpasar airport we thought we’d be back in Australia in eight hours but discovered there was a twenty-four hour strike. We had to wait until midnight before our plane took off.

Every day throughout our Java journey my daughter had reminded me of how many days we had left before we’d reach home. Now safely back on home territory, she asked, “Where will be go next, Mum?”