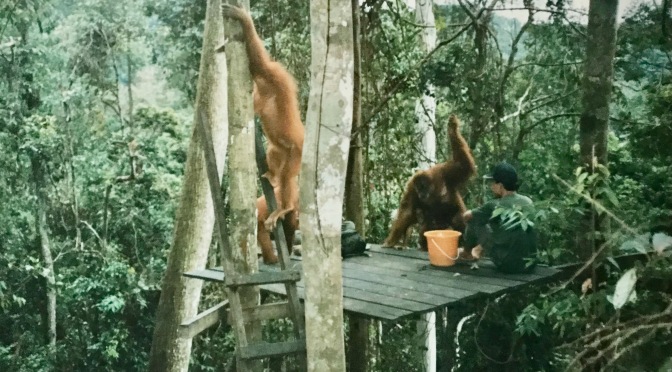 After four days on Samosir Island, we caught a ferry back to Prapat, then took a bus to Medan on Sumatra’s east coast. After the stillness of the island, Medan’s sprawl and noise hit us like surf pounding the sand. Luckily, we were headed for Bukit Luwang the following day.

Reading about Bukit Luwang was what originally yanked my travel strings towards Sumatra, because close to the small village was an orangutan rehabilitation centre. When the Indonesian government discovered orangutan illegally captured, the captors were fined and the animals were given a medical check up, then brought to this centre in the hope they would return to the wild. I don’t know how successful the program was because, like humans, orangutan need their mothers for years and these animals had no parent to teach them how to forage.

Our visit was a time before the bridge was built, so we followed the path along the river before we stepped into a canoe to cross the stream. I stumbled after the rest of the group of around ten tourists, way more fit than me as we climbed a muddy path into dense jungle. With sweat pouring from my body, we reached a clearing the size of a bedroom where one of the tourists barged to the front to take the best viewing spot.

On a wooden platform, the orangutan were fed a monotonous diet of bananas and milk to encourage them to forage in the forest. While the guide handed bananas to the placid animals, he pushed them away when they wanted to snuggle up to him. This was so the orangutan wouldn’t become attached to humans thus encouraging them to return to the jungle.

Gazing at these innocent animals, I realized the climb up the slippery path under steamy conditions was worth it. To top it off, as my gaze was transfixed on the docile adorable creatures  one of them peed and rightly it landed on the very tourist who had barged in front of everyone.

One thought on “Orangutan occasion”