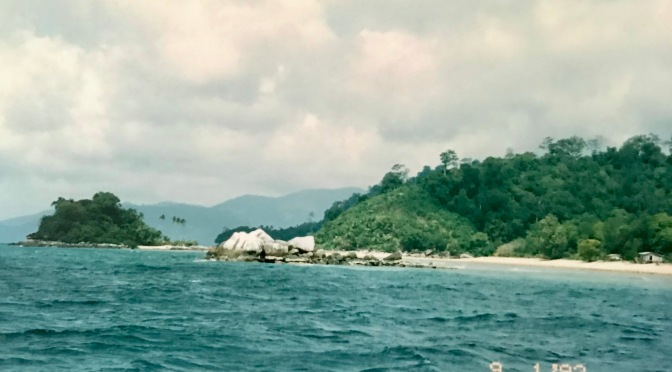 Malaysia’s Tioman was a lush island with untouched jungle and mountains as a backdrop. To make it even better, we arrived in the off-season, so although many restaurants were closed, the beaches were deserted. On the downside, the beach was narrow and rocky along the part we stayed and when we stepped into the water, we inevitably stood on sharp stones. Still, the island felt like a remote paradise.

During our tour of Sumatra, my daughter had suffered from constant weakness. I had taken her to a doctor there, but because of the language barrier, her condition persisted. I decided on a second doctor visit when her condition returned. We reached the resort south of where we stayed on motorbike where the doctor told me she either had an infection or hep C. I cancelled the ferry back to Mersing. Instead, we flew to Singapore the following morning, so we’d be close to a hospital if the medicine prescribed for an infection didn’t work.

I spent our last night on the island in the bathroom from food poisoning. In the morning, we both hobbled to the airport, wearily dragging our packs. Both of us were weak and exhausted but from different causes. Because the plane was small, I discovered there was no washroom. Would I survive the half hour flight?

In front of me, sat a woman with a different dilemma. The tiny aircraft jerked and swayed with every air pocked and I could see her knuckles turn whiter as she gripped the seat in front of her. When we landed after the short flight, I leaned forward and said, “Now you can relax.”

“I wasn’t frightened,” she snapped.

No, I thought, not half.