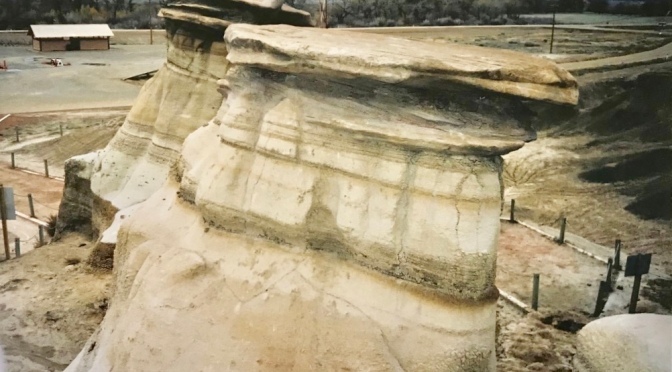 I’ve made many trips to my neighbouring province, Alberta. It isn’t that it’s the most exciting province, although there are a few unique sites, but my daughter lives in Calgary.

One of the first places I was keen to explore was Drumheller—135 kilometres from Calgary. The drive was dead straight ahead with hardly a rise or dip along the highway. We were only a couple of kilometres from our destination according to the road signs and I kept asking myself, where’s Drumheller? Then we drove into an oversized gully and had arrived.

Dinosaur fossils were a common find around Drumheller so the Royal Tyrrel Museum was packed with displays to die for if you’re a dinosaur fanatic. These famous creatures from the past have never grabbed my attention, so we waltzed through the exhibits at record speed.

What did hold my fascination on that cold and windy visit, was the landscape, appropriately named—the Badlands. Horsethief Canyon revealed low, barren hills, lined with layers of exposed erosion. But by far the most amazing sight after crossing the suspension bridge over Red Deer River, was the hoodoos. The landscape was like a setting from a sci-fi movie.

I was planning to revisit Drumheller this summer, but with the bushfires and then the landslides making B.C. difficult and dangerous to transverse, maybe in the spring I’ll think about driving there again.