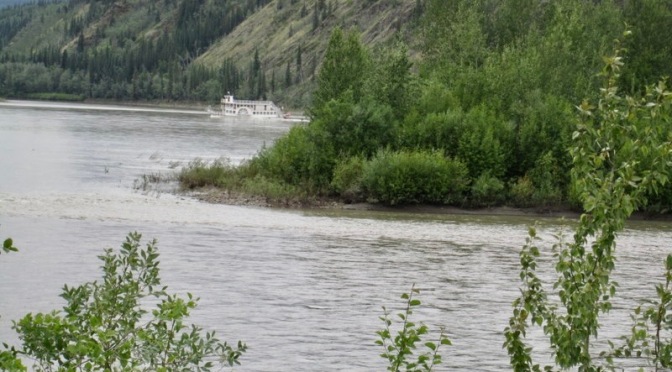 I stayed in what had once been a brothel—an elegantly restored hotel. On my first night, I found it hard to sleep. Out the window ya-hooing persisted. I had to remind myself, I was still in the north. It was summer. It was twenty-four hour daylight and some people didn’t seem to sleep during this time of the year.

This outpost had a good Chinese restaurant and equally good Greek restaurant as well as a supermarket that sold samosas! I clomped over wooden sidewalks that had been constructed during the gold rush era. With snow and slushy conditions, the wooden sidewalks had kept women in their floor length dresses drier.

One day I attended a First Nation jewellery making event. I stitched beads on to a strip of animal hide while our Tr’ondek Hwench’in (people of the river) guide helped us. On another day, I went to Fran’s tea workshop where I was introduced to a variety of forest foods the Tr’ondek Hwench’in Nation harvested. I still collect wild rose petals during spring to make the drink Fran shared with us.

By the Yukon River on the edge of town, I walked the upper dyke most afternoons as there was nothing more relaxing than being near moving water. This dyke was built because in the past, the Yukon froze over and when the ice began to melt, the city had flooded. After a walk when I found a bench, someone would start talking to me and I’d learn a little more about some of the locals including one who lived on the opposite side of the river.