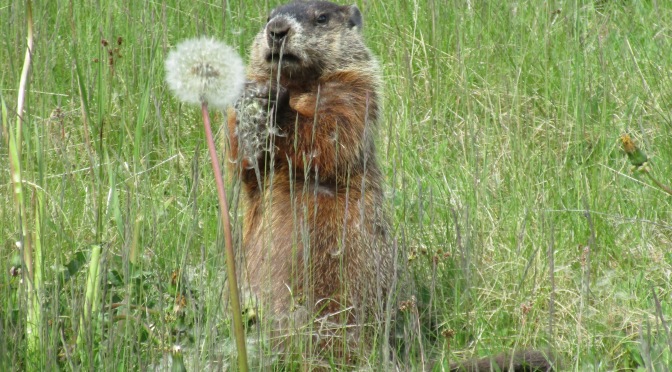 Fundy National Park by the Bay of Fundy just eighty kilometres east of St John was originally home to the Mi’kmaq and Maliseet First Nation Peoples and home to the meeting place of two systems—the marine coastal environment and the Caledonia Plateau environment. Because of the acidic soil, early European settlers exploited the timber for St. John but didn’t farm the region. By the late 1940s the area was designated a national park and opened to the public in 1950.

I had issues with the car I’d rented so arrived in Alma for a late lobster lunch before heading into the park a kilometre down the road. Lobster is one of the seafoods eastern Canada is noted for and I didn’t want to miss the opportunity to take advantage of the fresh ocean treats available.

I began with the Cassiopeia Trail that meandered through spruce and fir trees common in much of the park. I wasn’t sure where the trail headed so turned back and hiked the Caribou Trail that circled through a similar forest to wetlands of swaying grass and sparkling water. The trail was named for the herds of caribou that once roamed through the area until 1907, but sometimes white-tailed deer and moose could be spotted.

On a trail from peaceful Bennett Lake to Tracey Lake, only three kayaks cruised over the sparkling water. No one was by the shore and in most of the car parks within the national park, there were few cars even though the day was sunny and a pleasant twenty-one degrees. After the lake, I turned back to the park’s entrance because this was where another road led to the Coastal Trails. Here were spruce, birch and maple forests. By the coast, tree roots clawed the ground because of strong winds. Herring Cove Beach was a quiet secluded beach at the end of a short trail with gritty sand. Dickson Falls was another short one kilometre hike down to the base of the falls. By this time, I was hot, but by Dickson Brook, the air felt as if it was at least five degrees cooler.

Matthew’s Head Trail from the Herring Cove Beach Trail climbed to cliffs that revealed the rocky coast and an expansive view of the bay. My water supply was low, and it was close to the end of the day, so I didn’t finish the trail.

The following morning, I returned early for two hikes along the Coastal Trails. About one hundred metres after I drove over a covered bridge, a beaver sat nibbling on dandelion stalks. I sat motionless in the car watching it before I headed to the Coppermine Trail. This was just over five kilometres that was uphill until the trail looped back towards the beginning. Tiny squirrels were a common sight. After the loop the trail became more picturesque with views of the bay through the trees.

But the most beautiful trail was the short, easy to hike Shiphaven Trail where fields of ferns grew amongst red spruce. The site was recovering from one hundred years of logging where trees that grew for over three hundred years had been chopped down. Because of the Bay of Fundy high tides, small ships had sailed up Point Wolfe River to load the thousands of logs. Waste had been dumped directly into the stream and a dam built that destroyed the migration of fish upstream until 1985 when steps were taken to bring the stream back to its original pristine condition. From the present state of the forest along the short five hundred metre trail it appeared to be recovering well. I was glad I’d saved the best until last.