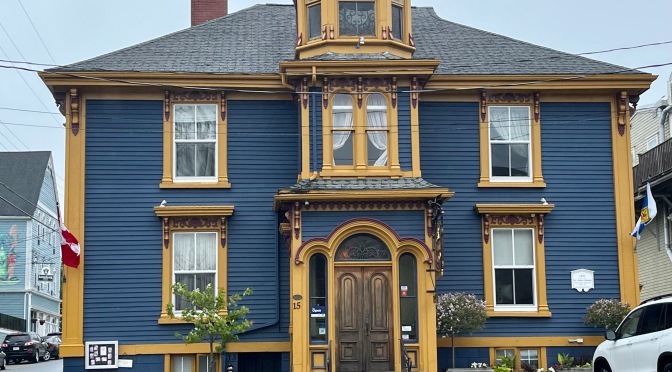 Between 1630 and 1680 Acadians settled in the area where they survived by farming and logging as well as trading with the Mi’kmaq. Like many locations in Nova Scotia, the British followed a century later. They put pressure on the Acadians to declare allegiance to the British Crown. Additionally, tension between the British and the Mi’kmaq began to undermine the French community so that by 1753 only one Acadian family remained. The English encouraged protestant settlers to the area who began farming, but soon found fishing more lucrative. Fishers travelled as far as the Grand Banks catching cod that were plentiful at that time. During the prosperous eighteen and nineteenth centuries, beautiful homes were built. In 1862 the area west of Old Town was developed to make way for an increasing population. In less than twenty years the area doubled in size and became known as New Town.

These homes had survived, and Lunenburg was designated a UNESCO heritage site because of the examples of Victorian architectural revivals. Most had been well maintained and bore plaques with the name of the builder. Some were turned into tourist shops giving the small town a unique feel. Many people wandered the streets to admire the buildings as I did despite the intermittent rain. And across from the wharf were restaurants focused mainly on seafoods—oysters, lobster, mussels, as well as fish.

The coastline around Lunenburg was referred to as the Bluenose Coast because it was where the original Bluenose sailing ship had been built. Back in the 1920s the America’s Cup race had been postponed due to high winds. Nova Scotians scoffed at this and viewed the decision with contempt because they had been used to sailing in those conditions. They declared a new contest—the International Fishermen’s Race where only fishing vessels could compete. The first year of the contest, the trophy was taken back to the U.S.A. but every year after that until the 1930s the Bluenose was undefeated. But in 1946 the ship hit a reef off Haiti and sank.

My timing to visit Lunenburg was perfect because Bluenose 11 was moored by the wharf in Lunenburg Harbour. It was raining on my arrival, so I waited for the next day to get a glimpse of this famous sailing vessel. The ship gleamed as if it had just received a fresh coat of paint. The deck was spotless, and the rigging well maintained—obviously cared for like the national treasure it was.

One thought on “Lunenburg”